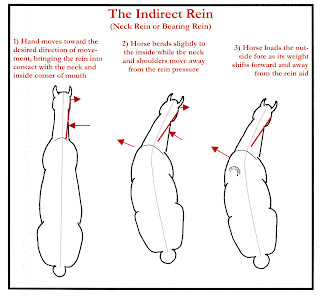 Like the Direct Rein, the Indirect Rein, also known as a Neck Rein or Bearing Rein, is a simple unilateral action of the hand, making it a basic yet effective aid for horses and riders of all levels; it is called an “indirect” aid in that it produces an effect on the side opposite from which it is used. Also like the Direct Rein, this rein will affect the horse’s lateral flexion, but has little or no direct effect on the horse’s longitudinal flexion, and will not produce collection.

Technique:
As its aliases imply, this rein aid bears against the horse’s neck while also applying a slight pressure on the corner of the horse’s mouth on the same side.


When using this aid it is crucial that, as the inside hand moves toward the neck and flexes the horse away from the direction of travel, the outside hand must also give, either by moving forward or by opening outward into a “modified” Direct Rein.

Uses:
It is used in any movement requiring counter-bending such as the turn on the forehand or haunches, etc., or for straightening a crooked horse momentarily.

It is also a partner rein for the Direct Rein, and both can be used to great effect in various combinations. Both of these rein aids are compatible in that, when used in the same direction, they displace the horse’s balance to the same shoulder, and therefore do not send contradictory messages or disturb the horse’s natural balance – something to keep in mind whenever applying two-handed rein aids; both rein aids should complement one another in directing the horse’s balance to one quarter at a time.* 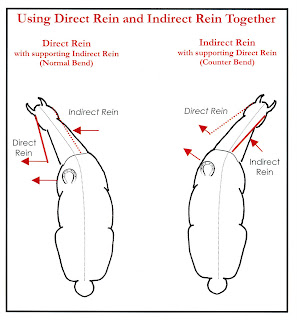 Variations:
In variation, these reins can be used as supporting aids to one another by modifying one so that it does not produce any significant amount of lateral flexion that might counteract the dominant aid; the desired direction of bend determines which rein aid will predominate. For example, when the Indirect rein is the predominant aid, the Direct rein can be a useful supporting aid, opening to encourage the horse to move into the "space" offered by the gentle leading of the outside rein. Here, the horse is counter-bent and moving away from the rein pressure on the inside neck, while the modified Direct Rein works on the outside to help regulate the amount of bend and support the horse’s movement to the outside. The Direct Rein as outside rein here is so slight that it will not produce any bending from the horse, but will support the general direction of movement.

In addition, if one must ride with both reins in one hand, direct and indirect reins will automatically be applied while steering.

Faults:
When employing an Indirect Rein, the predominant pressure should always be on the neck, and the rider needs to remain conscious of any undue pressure being applied to the corner of the mouth, as this will negate the effect of this particular aid and it will instead become an Indirect Rein of Opposition in Front of the Wither, which is a very different and much stronger aid than the basic Indirect Rein.

Ideally, the hand should not cross the mane while applying this aid, though slight crossing is sometimes unavoidable depending on rein length and hand height, among other things; the important thing to remember is not to apply pressure to the mouth if the hand must cross slightly, as this unbalances the horse severely and can even knock the horse over.

*a rider never wants to direct a horse’s balance into two different quarters at the same time with any combination of rein, leg or weight aids; the only time it is acceptable to apply contradictory rein aids is when asking for halt or rein-back, where with two simultaneous“direct reins of opposition” each rein directs the horse’s balance into its respective hindquarter – but more on that in coming articles...


Other Posts in this Series:

Inside vs. Outside: The Weight Debate

The Indirect Rein of Opposition in Front of the Wither

The Direct Rein of Opposition

The Indirect Rein of Opposition Behind the Wither