I'm a big fan of slow feed nets for my horses.  Not only do they slow down my hungry hippos, keep them busy and their bellies full until morning, they also help reduce waste.  I used to simply hang a net or two in each stall, but filling them got to be a chore, so I fixed half the net to the bars to make them easier to fill and then tied the pull-rope off to close them.  That worked well for a while until I saw a neat idea on another site and decided to give it a try.

Someone had woven two poles through either side of the top of the net so it could be opened and closed like a sandwich bag.  I bought a few Freedom Feeder nets because of their size and square shape, got some dowels from the hardware store and made some up.  I used the big sturdy snaps I normally hung my hay nets with, which have a 1" ring at one end, to slide over the ends of the dowels.  They were secured to the wall with some screw eyes.  Then all I had to do to fill a net was unsnap two snaps, drop in the hay, and snap them back up. 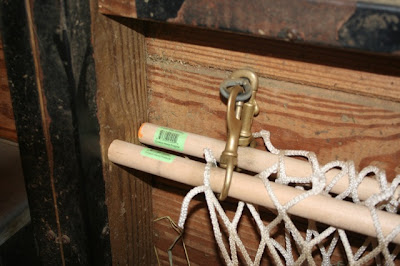 This worked great for months, and the Freedom Feeders held up pretty well, but our biggest, hungriest hippos eventually ate through the nets.  While researching new materials, I came across these hockey nets which are sold in bulk and cut to the desired length at Arizona Sports Equipment.  They are super-sturdy nets available in a variety of sizes and lengths, they are fairly chew and paw-proof, and the cording is wide enough that it's unlikely a shoe will get caught in it, so they can be hung low to the ground.  Another nice bonus is that they are woven rather than knotted, so I think the smoother texture must be easier on the horses. 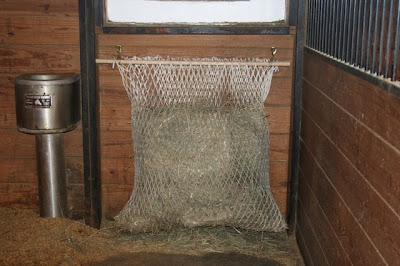 Since this system has worked so well in our stalls, first with Freedom Feeders, and now with the "hockey hay nets," I decided to try an experiment for making outside hay feeding easier using these sturdy hockey nets.

Up until now, I have been stuffing upwards of 10 slow feed nets per day to allow the seven horses enough to eat while also playing their little game of musical hay nets. But stuffing those nets, even when you've got it down to a science, is a pain in the butt, especially in these cold temps where the nets and ropes are frozen stiff, the snaps are ice-cold and often stuck shut, and your fingers don't work anymore.  Necessity (or maybe in this case, laziness) is the mother of invention. To make morning chores easier and quicker so I can maybe get to work on time one of these days, I came up with this net: 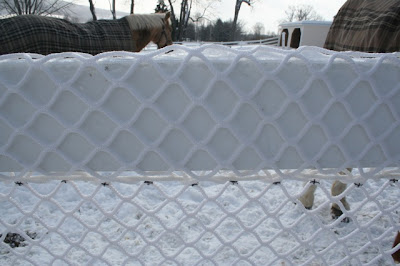 I bought the 90" net and had it cut to 8', the length of fence board between two posts.  Here I wrapped the top fence board with one end of the net.  A length of clothesline was woven through the net and tied to the posts on either side to hold it closed and secure the net. 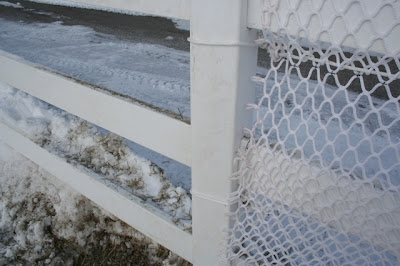 Then I did the same, wrapping the bottom of the net around the middle fence board, weaving a line through and tying it off on the posts. 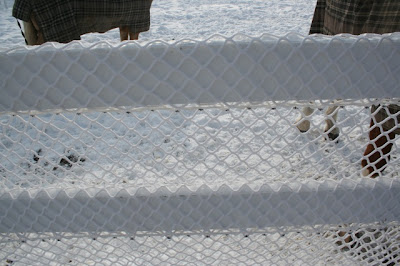 Then I laced up the open sides of the net, leaving a nice pouch hanging inside the fence line to hold hay.  From the outside of the fence line, I can now just drop hay in between the fence boards and it falls into the net.  No more tying ropes or messing with snaps.  Each nets fits an entire 50-80lb bale of hay, and is big enough for at least two horses to share. 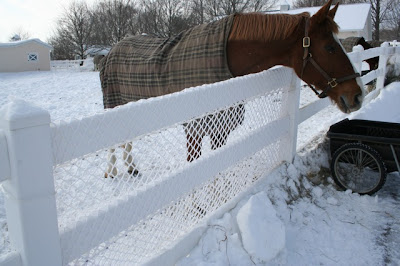 Nate supervised the entire operation to make sure it was to his specifications.  Can't tell if he's happy with the progress or maybe this is just him smirking at the involuntary snow angel I made while attempting to climb over the snow bank next to the fence - and yes, there are pictures of that too (thanks a lot mom! ;-) but I won't be posting them here!

The nets may not be beautiful, but they are handy.  The small holes still slow feeding and prevent a lot of waste, but now without the hassle of stuffing, tying and hanging individual nets.  I put up a total of five of these nets, so even if a few don't want to share or they want to play musical hay nets, there's still enough to go around. 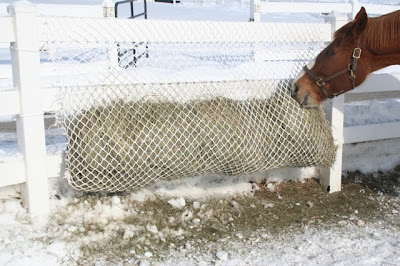 Here's Nate testing one out for himself.  Hope it's up to his high standards! 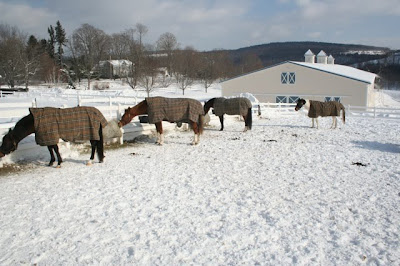