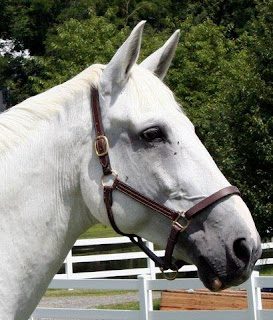 So, a while back I posted about a new horse we took into our barn, Grady, a 12-14 yr old Irish Sport Horse gelding. With most of my own horses either retired or not up to any kind of regular riding, I though having a nice big, well-schooled horse to play with might be fun. His previous owner was frustrated with him and had basically given up on him – he was bought as a jumper and wouldn’t jump anymore, and his feet were costing a fortune in bar shoes and pads, and time with abscesses and soaking, so she wanted to be rid of him. I knew he came with some issues, namely his horrific feet, but my vet and I thought we could improve them with some proper care. And anyone who knows me knows that horsey-makeovers/rehabs are one of the things I like best about what I do, and I’m a sucker for a horse with a sad story that needs help. So he seemed like a fun project.

He’s been with us now through the winter and his feet are a million times better than when we started. In fact, he’s now out of the bar shoes and pads and going comfortably BAREFOOT! Not to mention, his low heels and overlong toes have been rebalanced to provide a much more natural angle to his more upright forelimb conformation. There is still a slight break at the pastern, and it will probably take another good year of hoof growth to really transform his foot and get his heels completely back under him where they should be. But the improvement is like night and day.

We have also managed to improve the quality of his foot, decrease his shivers symptoms, and help his muscles to be less stiff with some good nutrition.

And, as an ex-show horse, he was probably never really turned out or allowed to be with a herd, and now he’s got the run of the farm and a bunch of buddies to hang out and play with, which he really seems to enjoy....

The trouble is he seems to enjoy it a little too much.

Now that he’s feeling better, he’s playing pretty rough out there. Some of the horses like to play with him, and some of them are annoyed by him and like to kick him. I had to muzzle Sami after I came home one night and almost had a heart-attack: Grady had a huge gaping wound millimeters from his jugular and a swollen windpipe I had to check all night to make sure he could breathe and swallow normally. His neck is covered in bites and his legs are covered in bumps and scrapes from kicks. Most of the kicks happen above the knee and hock, so boots are little help. I was waiting all winter to see if things settled down when the grass finally came back, but it hasn’t.

So, while I’m happy to see him having fun, I’m worried he might be seriously hurt (or that he might hurt someone else.) He’s not aggressive, it’s seems more like he just doesn’t know when to stop or can’t tell when the other horses stop playing and are actually trying to hurt him. He just keeps it up.

Here at the farm, we are not set up for private turnout, and I don’t believe in isolating horses from one another (unless sick or injured.) We try to keep their living conditions and social interactions as healthy and natural as possible. All of our horses go out together – mares, geldings, young and old. I was feeling like my options are limited to: cutting him off from the herd in his own paddock vs. taking the chance he might be seriously injured. So I started to wonder if Grady might not be better off going to a home with a less rowdy herd where he might fit in better.

After a good amount of deliberation, I decided this was the best way to go. The vet was scheduled to do spring vaccinations and health checks, so I thought I’d have him look Grady over and, once he was cleared for work, I’d put the word out that he was looking for a good home.

The vet was very happy with the progress we had made with his feet but, when we went to do a lameness exam, blocks, etc. he turned up positive for something vague in his lower limb. We decided to inject his coffin joint and see if that didn’t make him more comfortable, and I’ll have the vet’s take on that in 2 weeks when he comes out to do a second round of vaccinations. But now I have this doubt in my mind about sending him elsewhere.

The vet wasn’t sure if his issue is something to do with permanent damage or simply inflammation due to years of poor hoof care or the recent change to barefoot and the new stresses that might be placing on his feet. On his last visit, our farrier was also pleased with his progress, but did note that he thought it would be a good year plus before his feet could completely return to normal. He described it in terms of all those sensitive structures in his feet being “pinched” for so long that there would naturally be some residual effects, even though his overall balance and hoof health is improved. What no one knows is if, even when his foot is returned to normal after another year, he will ever be 100% sound.

This is the part that worries me. I decided a long time ago that I could never be in the sales business because I worry too much about what will happen to horses once they leave my care. I get to know their issues and their needs and I worry someone will not take care of them properly. I worry about what happens to most horses when they can no longer do their jobs, as most people board their horses and few people have the ability/desire to keep an unsound horse for life, much less pay to maintain him. So, if Grady isn’t 100%, what kind of future can he look forward to when he has outlived his usefulness? And is it a future better or worse than any potential injury he might sustain remaining a part of our herd?

This is the debate I am having with myself, and I have no idea what to do. When I take on a horse, I assume responsibility for that horse’s wellbeing for the rest of its life. Grady needs to be out and interacting with other horses, but he could get seriously hurt being out with the group he’s in. He might be better off somewhere else, in a safer environment, but he may not receive the care his issues require and, should he no longer be serviceable sound, well, I hate to think where horses like that end up....

What would you do in my situation? Anyone have any advice, thoughts or suggestions that might help me make a decision? I’d really appreciate any input you can give me! :-) 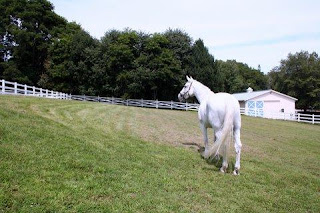